Look, this article doesn’t reflect what I believe anymore. It was written in an evening more as a compilation of talking points for a conversation I was having with my roommate, and then blew up afterwards when he posted it to the official Dunkey subreddit.

I’m not going to delete this post because I think it’s important for posterity at least, and so I can look back in a couple years for a good dose of embarrassment. Anyways, here it remains.

There’s a YouTuber named Dunkey who’s quite popular, with 3.4 million subscribers and millions of views within days of each new video. He’s famous in the video game community for his brutal takedowns of bad games and his genuine adoration for others. However there’s a thread through his content over the years that anyone who’s tried to honestly critique the video game community can clearly recognize as typical “Gamer” shittiness. Dunkey uses homophobic, ableist, racist and sexist slurs in his videos. He thinks it’s hilarious to beat and murder women in his videos and often screams sexist pejoratives while doing so. As of this writing, he’s never apologized for any of it and continues to make money off it.

Anyone who supports Dunkey needs to know that they’re supporting a man who’s said such horrible things as “big tits bimbo” in reference to Elizabeth from BioShock Infinite and told Dora the Explorer to “suck my dick” (which is in fact paedophilia). Let’s break down everything wrong with Dunkey into categories:

Dunkey has repeatedly released videos in which he finds it hilarious to beat and murder female characters in the games he plays. Dunkey reinforces the dangerous misconception that women are less than human, that they’re objects existing for the enjoyment of men. Here’s just a sample:

It’s like a montage of how many different ways you can be a sexist piece of shit on YouTube, but there’s more.

Dunkey is white. So it’s pretty unbelievable when in his rap video for Red Dead Redemption he repeatedly uses the n-word and other racist slurs (Source). In a karaoke section of one video game, Dunkey purposefully mocks the Japanese song, singing gibberish (Source). In another video for Sleeping Dogs, a video game set in Hong Kong, Dunkey walks up to some Asian women in a market and flatly states, “All you Asian people look the same to me” (Source).

Dunkey almost exclusively calls women “B*tch” in his videos, often times before or after abusing or murdering them which he believes to be funny. But there’s nothing funny about what he’s doing. He does it so often I gave up trying to sort through it all and resigned to the fact it’s an integral part of his content. Take a listen:

He also used a sexualized woman in a thumbnail, using a gay slur because of course he did:

This feeds into the next issue with Dunkey’s content.

Dunkey has also used gay slurs in his content. In a video for the N64 game Glover Dunkey refers to one of the enemies as a “f*ggot” (Source). In another video for Max Payne 3, Dunkey was commenting on the game’s music, stating it’s “so awesome that you could just be doing the gayest shit” and then plays the game music over video of him cracking an egg (Source). He’s insinuating that cooking is a gay thing I guess? The point is that he has no problem using homophobic slurs and demonstrates a complete disregard and disdain for LGBT folks. In another video for the multiplayer game Blackwater, he includes one of his friends saying “It’s not gay if you’re at sea for several days” confirming that not only is Dunkey homophobic but so are his friends (Source).

Getting Banned from League of Legends

In 2015 Dunkey was banned from League of Legends for saying: 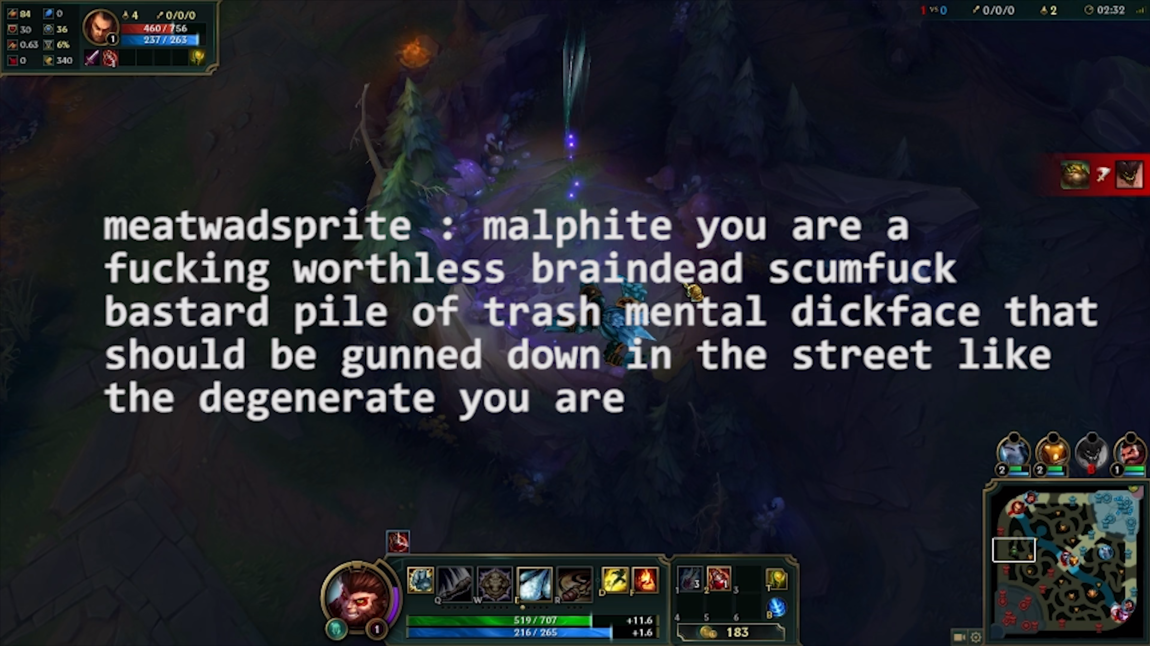 He goes on to say in his video that “I can understand being banned for cheating or going afk or feeding on purpose but talking shit to some guy that is a total dumbass? What is this? Fucking pussy-ass baby preschool time?” (Source). This clearly indicates Dunkey has no understanding of how words can affect people and how utterly oblivious he is to the notion of other player’s feelings. It’s clear to the viewer that this whole whiny video is just a result of Dunkey’s feelings being hurt and instead of reflecting on what behaviour led to his situation he chooses to blame Riot Games for failing to appreciate him. He believes he is more important than the other players and exceptions should be made for him because he’s a YouTuber.

The whole video is essentially Dunkey throwing a tantrum, it’s disgusting and embarrassing. With this perspective, it’s no wonder that Dunkey can say such horrendous things about women and minorities without any guilt or regard for how his words might affect them. He is a callous, conceited man whose arrogance really is what’s making the video game community such a toxic, uninviting place.

One of Dunkey’s most famous videos is one in which he mocks the first all-female League of Legends team, named Team Siren. He falsely paints them as man-hating, unintelligible whiny girls, which if you watch the original video couldn’t be farther from the truth. What Team Siren was trying to do with their formation and their announcement video was show the world that there’s room in the eSports scene for women to compete. And yeah it used dubstep and some flashy transitions but that’s just eSports, you can’t single out Team Siren for these things.

But Dunkey couldn’t let that be and he thought it’d be best to create another video mocking them which he titled “Dead Serious Girl Gamers” because of course he fucking did how dare women try to get into games. He broke down each aspect of the trailer with his own voice over, imitating each woman in a mocking, whiny voice and teasing them. It’s frustrating to watch considering how discouraging it already is for many women to get into games without shitheads like Dunkey treating tearing them down just for doing so.

The “Guide to Girls”

One of the most egregious videos Dunkey has made, and one of the ones that launched his career, is a video entitled “League of Legends : Guide to Girls” Dunkey states that about 95% of his viewers are male, so he’s going to tell them how to pick up girls in League. But before that he goes through some comments from viewers saying they’re women, calling one a “stuck-up b*tch” (Source). He then proceeds to tell the presumed male viewer that you need to identify which people in your lobby are playing as female heroes, those are your most likely “targets.” He says you should make sure you let those heroes kill you because “girls like it when you let them win” (Source), implying that female players can’t play on male player’s level. He then proceeds to say “but you also have to show them that you don’t take shit from them, from that stupid b*tch that I’m the man in this relationship!” (Source). He then goes around targeting all the female heroes, claiming he’s “sending them to hell” and that no one else can kill them screaming “she’s mine! That’s my woman!” (Source).

He released a follow-up video called “Guide to Girls 2” in which he claims “I’ve become the forthright authority on League of Legends women” and that he’s talked to “all 150 girls in League” during which he flashes up a card with “Actual (boobs + vagina)” written on it (Source). This only further illustrates Dunkey’s sexism and transphobia, reducing them to their sex appeal and genitalia. He refers to the women who play League of Legends as “stupid bimbos” and for the rest of the video he goes on about the different types of “b*tches” you’ll encounter and how to course them.

I want to close out by just saying that supporting Dunkey is supporting sexism, misogyny, homophobia, transphobia, racism, ableism and a toxic gaming community. Dunkey represents much of what’s wrong with the video game community and why it’s so shitty and abusive towards anyone who is not a straight, white male. While people will try to defend him, saying he doesn’t demonstrate these beliefs in every single video, it shouldn’t matter because the fact he demonstrates these beliefs at all is reason enough to end your support. And some may even say that just because he makes these “jokes” doesn’t mean he believes them, which a) if he’s making the jokes he believes they’re funny and b) when you have an audience of millions it doesn’t matter if you believe it because you are normalizing that kind of behaviour.

If you look at the patterns of behaviour over the years it’s impossible to deny this is a really shitty guy. He rose to fame off of sexist content, and while he may not murder a woman in every video he carries all of that misogyny with him in all his work. If you read through all of this and are still okay with supporting him then you’re just as bad as he is. I implore anyone still reading to look for new artists to support who don’t use their platform to say and do such horrible things to already victimized and vulnerable people.